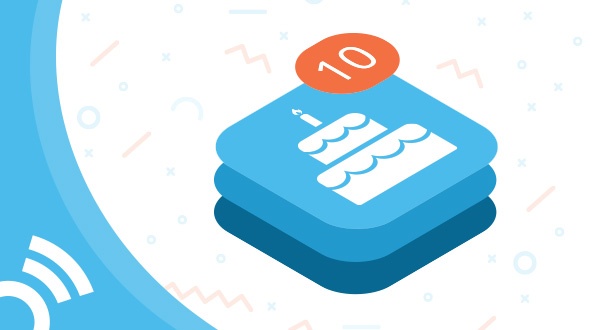 10 Years of Apple’s App Store: A Decade of Change

Apple’s App Store seemed like a staggering success when it first launched in July 2008. With 800 apps and 10 million downloads in its first weekend of existence, the App Store offered enormous choice to owners of the iPhone 3G. Still, few could have predicted the enormous impact that the App Store would have. The App Store created a multi-billion dollar industry and ushered in the app ecosystem that’s so dominant today.

In 10 years, the number of apps exceeded 2 million and total downloads passed the 170 billion mark. Underlying these impressive numbers are some fundamental changes in how apps are used and monetized.

In a July 2008 Apple press release heralding the success of the App Store, 200 of the 800 available apps were free. Monetization options were limited at the time, and most publishers opted for premium download prices to monetize their apps. Nearly 10% of the apps at the time were priced at more than $10. That’s no longer the case.

Now, 9 out of 10 apps are available for free. Publishers have so many more options to generate revenues than the early days of the App Store thanks to the rise of in-app purchases and advertising options. Apps are no longer locked behind a paywall. Instead, they’re available for all to use without having to download.

The App Store got its start in the US but is now a global powerhouse. The value of the US market is enormous, but growth has matured compared to other countries. In 2015, China surpassed the US in total downloads from the App Store. App Store revenues in China exceeded the US in 2016.

App Store growth in other APAC countries, in addition to Central and South America, has also been large. This global reach means that app developers have access to a global audience. Furthermore, advertisers can access users from all over the world thanks to the vast number of iOS users downloading from the App Store.

App options were limited in the first year of the iPhone’s existence. With no App Store, users could only choose from a series of pre-installed apps (at least officially – some creative jailbreakers were able to add more features). These early apps covered most of the basics, such as messaging and YouTube, but lacked the freedom of choice. The App Store changed that while also changing the habits of iPhone users.

Now, the average iOS and Android user has more than 80 apps on their phone. In China, the average number of apps per user is more than 100. Despite the high number of apps per phone, users use only 40 per month. This is an opportunity for app developers, as users are willing to experiment with new apps, but also a challenge because users ignore many apps after first giving them a try.

The Future of the App Store

So what’s next for the App Store? It’s hard to say. Continued growth is a safe bet, even as iOS loses some market share to Android. More free apps are all but guaranteed, as publishers favor in-app monetization over premium pricing. That’s a good thing, as Smaato supports making apps free.  The rise of these apps shows that users want free apps as well. The next big thing might be related to augmented reality and virtual reality. Apple, along with publishers, has invested heavily in these technologies. This could reshape the App Store even further in the coming years.